Simon Pegg is a well known Actor , Comedian & Producer who is best known for his role in “Shaun The Dead”, “Hot Fuzz” & “Spaced” . He started his career as a Stand Up Comedian before entering into Acting and Film Production. He is also into writing stories and Films, the Movie in which he starred , he was the Co-writer of Shaun The Dead. Simon John Pegg or famously known as Simon Pegg was born on 14th of February, 1970 ,He is currently 52 years old, He is from Brockworth, United Kingdom, He is British by nationality . Simon’s Sun sign is Aquarius and he believes in no religion and he is an Atheist .

Simon was  born to John Beckingham and Gillian Rosemary , His father was a keyboard salesman and a Jazz Musician, Simon’s parents separated and his mother remarried, he took his step dad’s last name Pegg. Simon had this artistic sense and good sense of humor  from his parents only.

Simon Pegg studied in several schools , one of them was The King’s School, Gloucester and Castle Hill Primary High School , after that he went to Stratford -Upon-Avon College to study English Literature and Theatre. He Earned his Bachelor’s degree from University of  Bristol , where he studied Drama. Simon with his wife Maureen

Talking about Simon’s Love life , he is a One Woman Man, He is married to Maureen McCann in the year 2005 , and they also have a Daughter together named Mathilda. Simon in Shaun the Dead 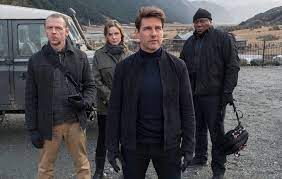 Simon in Mission Impossible along with Tom Cruise Simon started his career with Stand Up Career at the local Clubs in 1991, He then moved to London to become a full fledged  Comedian and toured all over England, He then started to appear in TV comedy sketches like “faith in the Future” and “Big Train”. After that he Co wrote and Starred in the TV sitcom “Spaced” that remains to be on of his major works, The series was broadcasted for two years and was nominated for two British Academy Television Awards.

He made his big screen presence in the year 1990’s when he started to play small  roles in films like “Tube Tales” and “Guest House Paradiso”. After that he starred and co wrote one of his most popular films, “Shaun the dead”, in 2004 He portrayed a man who had family problems and also he had to deal with Zombies at the same time. The film was a Huge success both in front of the Critics and the audience loved it too.

He played the role of Benji Dunn, an I.M.F technician in ‘Mission: Impossible III’ in 2006. He reprised the role in the next film of the franchise, ‘Mission: Impossible – Ghost Protocol’ in 2011. He had a bigger role in the latter. The action comedy film  ‘Hot Fuzz’ which he co-wrote with Edgar Wright and appeared in  as Nicholas Angel, a dedicated police officer, is also one of his famous works. The movie was widely appreciated and was a huge success both in front of the critics and the audience loved it too. His Networth is around $25 Million.