Shantanu Narayen is an Indian-American business entrepreneur who was born on May 27, 1963. Since December 2007, he has served as Chairman, President, and Chief Executive Officer (CEO) of Adobe Inc. Since 2005, he has served as the company’s president and chief operating officer.

Narayen was born into a Telugu-speaking household in Hyderabad, India, and was the second son of an American literature teacher and a plastics company owner. He was a student at the Hyderabad Public School.

He was a student at the Hyderabad Public School.
He graduated from Osmania University’s University College of Engineering with a bachelor’s degree in electronics and communication engineering. To finish his study, he travelled to the United States, where he earned a master’s degree in computer science from Bowling Green State University in Ohio in 1986. He graduated from the University of California, Berkeley’s Haas School of Business with an MBA in 1993. 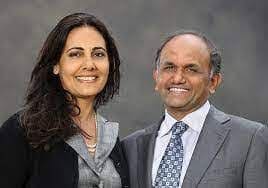 Shantanu Narayen was born into a Telugu family. Reni Narayen is his wife, he met his wife Reni while at Bowling Green State University in the mid-1980s and they have two boys named Arjun and Shravan Narayen.

Bruce Chizen stepped down as CEO of Adobe in November 2007 and was succeeded by Narayen on December 1, 2007.
As CEO, Narayen oversaw the company’s transition, which included shifting the company’s creative and digital document software brands from the desktop to the cloud, including flagship applications such as Photoshop, Premiere Pro, and Acrobat/PDF. Furthermore, during his term as CEO, Adobe has expanded into the digital experiences market, beginning with the acquisition of Omniture in 2009.

Adobe’s market capitalization surpassed $100 billion in 2018 and it became the first company from the United States to join the Fortune 400. It also placed 13th on Forbes’ list of the Most Innovative Companies in 2018. He grew up in Hyderabad, India, as the second son of an American literature teacher and a plastics industry owner. In Hyderabad, he attended Hyderabad Public School. Narayen graduated from Osmania University in India with a Bachelor of Science in electrical engineering, a Master of Business Administration from the University of California, Berkeley, and a Master of Science in computer science from Bowling Green State University in Bowling Green, Ohio.

Narayen earned an honorary Doctor of Applied Science degree from Bowling Green State University on May 7, 2011.

He began his professional career with Apple. Following Apple, Narayen worked at Silicon Graphics as director of desktop and collaboration products before co-founding Pictra Inc., which pioneered the notion of digital photo sharing via the Internet.

He is also a member of the Dell Inc. board of directors and the Haas School of Business at the University of California at Berkeley’s advisory board.