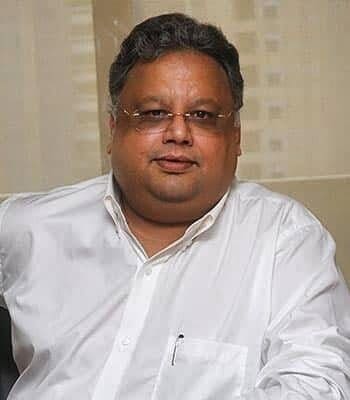 Rakesh Jhunjhunwala is an Indian investor, trader and qualified Chartered Accountant who is considered to be the greatest investor in the Indian market. ‘Forbes’ described him as an “Investor with a Midas touch”; ‘India Today’ called him the “pin-up boy of the current bull run”; and ‘The Economic Times’ named him the “Pied Piper of Indian bourses”.

He currently ranks as the 54th richest person in India on the ‘Forbes’ list, which estimates his net worth at USD 2.9 Billion as of November 2017. He is a partner in his asset management firm, Rare Enterprises; is the chairman of Aptech Limited and Hungama Digital Media Entertainment Pvt. Ltd.; and is a member of the board of directors at a bunch of Indian companies.

He has been credited as the co-producer of several Bollywood movies such as ‘English Vinglish’, ‘Shamitabh’ and ‘Ki & Ka’. There is a popular parody blog based on his life, ‘The Secret Journal of Rakesh Jhunjhunwala’, which was in 2012 revealed by ‘The Economic Times’ to be written by two persons: ‘Forbes’ columnist Mark Fidelman contributed to the blog for a year before it was taken over by Indian author Aditya Magal. Rakesh Jhunjhunwala, the son of an income tax officer, started dabbling in stocks while he was still in college. He was inspired by listening to his father, who was interested in stock market and often discussed stocks with friends. He also learned his first lesson from his father, who told him that the price fluctuates because of the incidents happening around the world, and encouraged him to check the news.

As the young boy became more and more fascinated with stock market, he expressed to his father his intention to invest. His father told him to invest his own money, instead of borrowing from friends and family, and instructed him to get professional qualification as well, following which he decided to pursue a degree in chartered accountancy. Rakesh Jhunjhunwala was born on July 5, 1960 in Mumbai, India into a Marwari family. His father was an Income Tax Officer posted in Mumbai. He was the youngest member of a middle-class family and had a brother named Rajesh. He completed his bachelor of commerce degree from Sydenham College and then enrolled into the Institute of Chartered Accountants of India from where he completed his CA degree in 1985.

He is married to Rekha Jhunjhunwala and the couple has three children, a daughter named Nishtha and twin sons, Aryaman and Aryavir. The name of his privately owned stock trading firm, Rare Enterprises, is made by combining the first two letters of his name and his wife Rekha’s name. He is known as a family man and is very close to his brother, wife and children. He raised his children in a way so that they do not feel wealth is a necessity for every pleasure in a human being’s life.

In February 2012, he and his wife hosted a party to celebrate their 25th marriage anniversary, which was a star-studded affair attended by several renowned politicians, businessmen and celebrities including Anil Kapoor, Suniel Shetty, Kabir Bedi, Tabu, Talat Aziz, Rajkumar Hirani, Harsh Goenka, and Ramesh Sippy.

The way media portrays him, it is easy to believe that Rakesh Jhunjhunwala was born with a midas touch and made only the correct choices throughout his life. However, according to him, it is the mistakes he made that has helped him be a better investor. He thinks that to succeed in the stock market, it is important to acknowledge one’s mistakes and learn from them.

He is also known for taking risks and being bullish about his investments. He believes that in the next two decades, India “could see a bull run like the one Wall Street had from 1987”.

He is also a philanthropist and reportedly intends to donate at least 50% of his fortune to charitable organizations. He is an advocate of the education of children from disadvantaged backgrounds and personally sponsors nearly 400 schools.