Pierce Brendan Brosnan , also known as Pierce Brosnan is a famous actor who is known for his role as secret agent James Bond .  He started out as a theatre artist and was highly appreciated for his role in ‘The Red Devil Battery Sign. Pierce is best known for his charm and versatile acting skills with which he Entertains the audience very much. Pierce Brosnan was born on 16th of May, 1953. He is currently 68 years old, He was born in Drogheda, Ireland , His nationality is Irish American, His zodiac sign is Taurus, and he is Catholic by religion.

Pierce Brosnan was born in a small Irish family his father Thomas Brosnan was a carpenter , his mother was Mary May Smith, Pierce’s father abandoned him when he was a baby, His mother left him with her parents and went to train as a nurse, he had to spend most of his time at the relatives house after the death of his grand parents. He again met with his mother when  he was 11, His mother then married William Carmichael, and took him to London.

Pierce Brosnan completed his Education from Elliot School , After leaving school, he went to ‘Saint Martin’s School of Art’ to study commercial illustration. After he decided to become an Actor , he joined the Drama Centre , London and graduated in  1975. Pierce with his wife Keely Shaye

Pierce Brosnan married Cassandra Harris , he adopted her two kids from a previous marriage , The couple also had a son together. The couple had to part ways due t the Untimely death of Cassandra due to cancer. He then married Keely Shaye Smith  in 2001 and they have 2 children together. 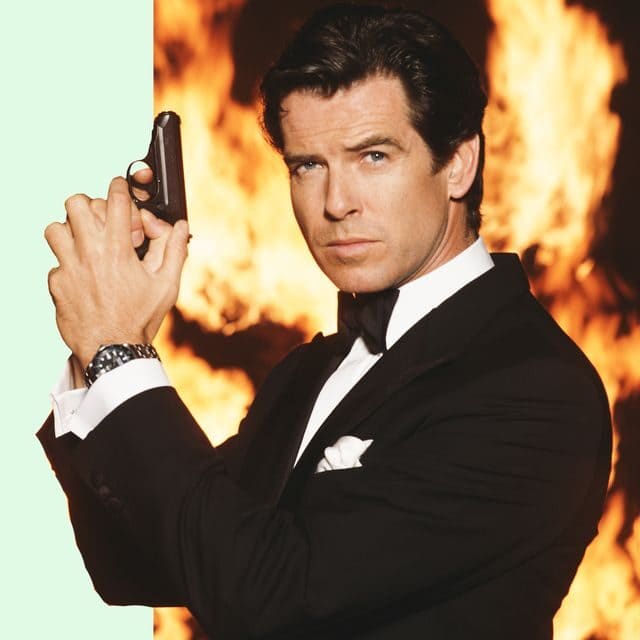 During the start of his career he worked as a Assistant  Stage manager at the “York Theatre Royal” in 1975, after which he got a chance to play McCabe in “The Red Devil battery Sign” His performance marked his beginning of his career. Through the Decade of 1970 -1980 he played Minor roles in the television,  he was cast in the television series ‘Remington Steele’ in 1982, it went quite popular and went on till 5 seasons.

In 1987 he made his appearance in “Cold war” , a spy film “The Fourth Protocol”, gained a lot of attention among the public, His ability to make Thrillers even more thrilling was the main thing that he was famous for . In the year 1994 he was offered to play the secret agent James bond in 3 movies with an option of playing the role in 4th film, his first James bond movie ‘Golden Eye’ gained a lot of attention and remains to be the most successful James bond movies.

His major works include the James Bond Series, and in most part of the world he is known as James Bond , Four of his James Bond films are , ‘Golden Eye’ , ‘Tomorrow Never Dies’ (1997), The World Is Not Enough’ (1999), Die Another Day, it was the highest Grossing Bond Movies till date. His good looks and Intellectual Personality attracts youths and makes him the nest fit for any kind of Secret agent role.