Naomi Elaine Campbell was born on 22 May 1970 in Streatham, South London, England. She is 51 years old as of 2021. Her zodiac sign is Gemini. Campbell’s descent is Afro-Jamaican, as well as Chinese-Jamaican ancestry through her paternal grandmother, whose surname was Ming.

Naomi began her career at the age of 15 and has established herself as one of the most recognizable and in-demand models of the past four decades. Campbell was one of six models of her generation declared supermodels by the fashion industry and the international press. Campbell was born in Streatham, South London to Jamaican-born Valerie Morris, a dancer. Naomi never met her father as per her mother’s wishes, who abandoned her four months pregnant mother and was unnamed on her birth certificate. From her mother’s second marriage she took the surname “Campbell”. In 1985, her half-brother Pierre was born. Campbell spent her early years in Italy and Rome, where her mother worked as a modern dancer. She lived with relatives after their return to London, while her mother traveled around Europe with the dance troupe Fantastica

Campbell attended the Barbara Speake Stage School from the age of 3 and at 10 she was admitted into the Italia Conti Academy of Theatre Arts, where she studied ballet. She also attended Dunraven School.

In 2021, Naomi revealed about her daughter through an Instagram post. Naomi seems to raise her child as a single parent as the baby’s father is not known.

In 1978, Campbell was 7 years old, when she made her first public appearance in Bob Marley’s music video “Is This Love”. At 12, she tap-danced for Culture Club’s music video “I’ll Tumble 4 Ya”. She had studied dance from the age of 3 to 16 and originally intended to become a dancer. In 1986, while still a student at the Italia Conti Academy of Theatre Arts, Campbell was spotted by the head of the Synchro Model Agency, Beth Boldt, while window-shopping in Covent Garden. Her career took off quickly in April, just before her 16th birthday, she appeared on the cover of British Elle.

Campbell is also involved with many charitable causes.

Naomi Campbell ensured all eyes were on her as she arrived for the Louis Vuitton Fall/Winter 2022 menswear show held at Le Carreau temple on Thursday during Paris Fashion Week. The 51-year-old model showed off her style credentials in a long white coat from the designer. Naomi paired the look with white ankle boots and oversized sunglasses as she sat down to watch the show, which honored the innovations of the late Virgil Abloh. 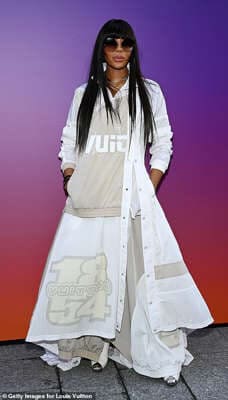