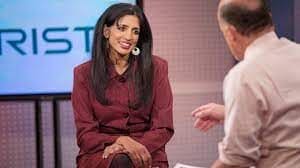 Jayshree V. Ullal (born March 27, 1961) is an American businesswoman who is the president and CEO of Arista Networks, a cloud networking firm that is in charge of deploying 10/25/40/50/100 Gigabit Ethernet networking in data centres. Vijay Ullal is her husband. They live in Saratoga, California, with their two kids. From September 2012 until November 2014, Vijay Ullal, currently a venture entrepreneur and investor, was president and chief operating officer of Fairchild Semiconductor. She is also the sister of Susie Nagpal, a former Saratoga City Councilwoman who has a son and a daughter. According to Forbes, Jayshree owns around 5% of Arista’s stock, with part of it set aside for her two daughters, niece and nephew. Ullal began her career at Advanced Micro Devices (AMD) and Fairchild Semiconductor, where she worked in engineering and strategy. Before joining Crescendo Communications, she was director of internetworking products at Ungermann-Bass for four years. Ullal was promoted to vice president of marketing at Crescendo, where he worked on 100-Mbit/s over copper, the first CDDI devices, and first-generation Ethernet switching.

Cisco Systems purchased Crescendo Communications in September 1993, marking the company’s first push into the switching business. Ullal joined Cisco in 1993 and began working on the Cisco Catalyst switching business, which developed from its inception in 1993 to a $5 billion enterprise in 2000. Ullal was responsible for unified communications, IP telephony, content networking, and policy networking as vice president and general manager of LAN switching in the Enterprise group. She was in charge of 20 enterprise mergers and acquisitions for Cisco.

Ullal was later promoted to Senior Vice President of Data Center and Switching, reporting directly to John Chambers, the company’s CEO. The management of the modular Nexus and Catalyst Data Center Switching and Application/Virtualization services, which generated around $15 billion in direct and indirect revenue, was one of his responsibilities. Ullal worked with Cisco for more than 15 years.

Andy Bechtolsheim and David Cheriton, co-founders of Arista Networks, a cloud networking business based in Santa Clara, were named Ullal CEO and President in October 2008.
For her work at Arista Networks, Forbes magazine called Ullal “one of the top five most significant persons in the networking business today.”
Ullal led Arista Networks to an initial public offering (IPO) on the New York Stock Exchange in June 2014, with the ticker ANET.
In 2018 and 2019, Jayshree was named one of Barron’s “World’s Best CEOs” and one of Fortune’s “Top 20 Business Persons.”