Bretman Rock is a famous Social Media Influencer . He is famous for posting makeup tutorials and his short and humorous contents on life. According to his fans the reason Bret has achieved this much popularity in his life is all because of a video he posted in 2015, after that there was no looking back for Bretman. Little Bretman Was born on 31st of july,1998 , he is currently 23 years old , he was born in Philippines, and is American by Nationality , His zodiac sign is Leo and he follows Christianity as a religion. Bret with his Sister Princess Mae making videos on Instagram Bretman and his mom  buying a  house

Bretman Rock was born in Philippines, His father Edmund Laforge died in November 2020 , after he went into Coma. His mother is Mercedita, and his sister’s name is Princess Mae, She is also quite famous on Instagram and has over 2M followers. She also appeared on many videos with Brett.

His Father always liked Wrestling and names Brett after Bret Hart and The Rock. Bretman Uploaded a video with a thumbnail of I hate School

Bretman is not that much Educated , He has a  High School degree from James Campbell High school, Ewa Beach, Hawaii . From the very Beginning he was into sports , Volleyball, Soccer, baseball. Bret with his anonymous boyfriend

Bretman is Homosexual. He is unmarried .

Bretman was reported to be  in relationship with anonymous guy in 2019, Bretman Share a strong bond with that guy, But his name and other details are not yet reported. 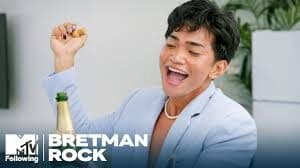 Bretman in a TV Show Bretman started his journey through YouTube in 2015 though he created his channel in 2012.He has a genuine interest towards fashion , beauty and Makeup, he posted a lot of content on YouTube regarding Makeup and stuffs. That was the beginning of Bretman Rock and from then he started to make videos on Various other social sites.

Bretman has around 8M subscribers on YouTube and has about 17M followers on Instagram. He uses his followers and Power, he also released his merchandises which provides him quite a good amount of money .

His great Following on both Instagram and YouTube allows him to make Brand Deals and earn great from Ad revenues , he also acted in a Ellen Digital , Web Series.